The MPU-401 MIDI interface set the standard for how MIDI devices communicated on the PC. The MPU-401 was an external interface box with its own CPU and memory, attached via a custom cable to an ISA card to the PC. Other interface cards were available for hooking it up to other PC’s including the Commodore 64. 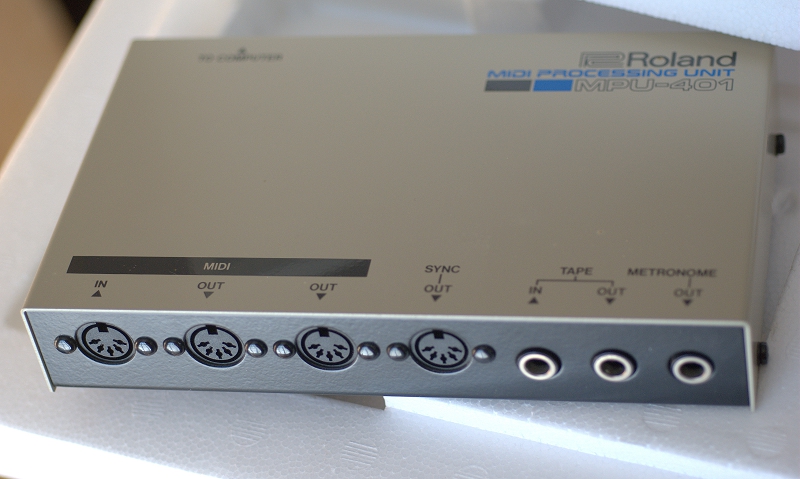 The Sound Blaster 16 (and most cards since) shipped with an MPU-401 compatible MIDI interface on the game-port. That said, it was only compatible with UART mode. So to be specific, it’s the MPU-401 UART mode that is the standard for PC MIDI.

Intelligent mode let the box do things like run generate a click-track (metronome) by sending a simple command, among other things. In practice though, 99% of software utilized UART mode, which literally broadcasts/listen to raw MIDI data sent out the port.

The MPU-401 uses two 8-bit registers to read/write its data.

This is a USB MIDI device I own. I keep forgetting, but unlike other (cheaper) USB-MIDI devices, this device actually has no firmware. The firmware needs to be uploaded to the device on power-on. THIS is why you need drivers to use it.

On Windows it’s easy, just download the MIDISport from M-Audio.

On Linux, install the firmware package.

Now next time you plug in the device and do a aplaymidi -l, you should see the two ports available to you.

Sometimes Midi Audio get stuck and you need to send a panic to the MIDI device. This and many other bulk midi operations (SYSEX dump) can be done with the amidi tool.

This guide is useful.

By default, Ubuntu ships with a kernel that cannot be interrupted (pre-empted). This could potentially cause audio hiccups. If you check uname -a and don’t see a PREEMPT, then you’re not running a pre-emptable kernel.

In addition, doing a grep ^CONFIG_HZ /boot/config-`uname -r` will tell you the current time tick rate. Ideally for audio you want 1000, not 250 as the defaults may be set to.

After you reboot, you’ll have a much more responsive Linux.