To say 2010 has been a busy year would be an understatement.

While we were all waiting for Apple to confirm the existence of the iPad, I was busy tweaking, improving, and porting my game Smiles to a bunch of new platforms. The most significant port by far was to Netbook PCs for Intel’s AppUp Center, a brand new App Store coming soon to Netbooks everywhere.

To say Intel and AppUp have been good to me, that would be another understatement.

Since last year, Intel has been running a contest to attract developers to their platform, and you might say, I hit a grand slam with them. Intel ran 3 rounds of prize giveaways, and I won something awesome in every round!

Late January, I received a note informing me that I came 2nd Place in their Early Bird Deadline contest. The Early Bird contest featured 5 prizes; 3 home entertainment packages, and 2 cars! 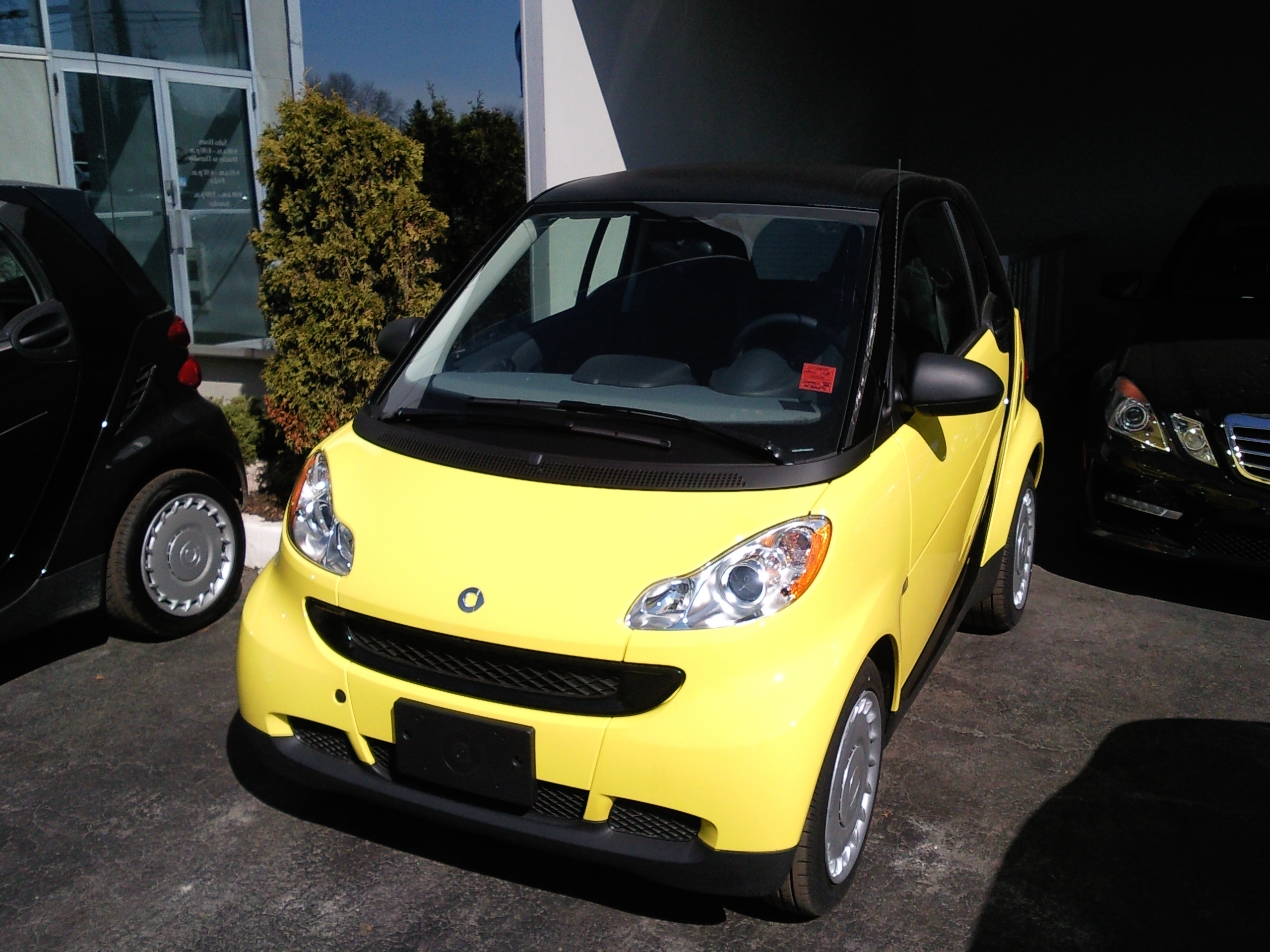 This is somewhat appropriate. A car won with a cheerful game called Smiles. Even the car is smiling.

iPhone Smiles is small enough to be downloaded 2x over 3G, and you can fit 2 of my cars in a parking space.

Above you can see my new 2010 “Smart for Two” smart-car, in a very bright shade of yellow. So if you’re in London Ontario Canada, and you see this little yellow beast drive by, that might be me.

Talk about kicking 2010 off with a bang!

I was totally giddy; Cheering, laughing, celebrating the fact that I won a car making games. It’s just such a weird yet awesome thing to happen, and such a fun story to be able to share. What a fantastic start to a very futuristic sounding decade.

Then it happened again!

Around the middle of February, I get ANOTHER e-mail, this time telling me my game Smiles won the “Elegance in Design” award. That was 1 of 2 prizes everyone was gunning for (the other award was “Most Innovative App” which went to FXpansion for GURU). And what was the prize? Oh, an all expense paid trip to GDC!

I don’t know about you, but I really did have TWICE the GDC as everyone else

Now I already had my travel and hotel arranged for the conference, but when Intel decides to pay your way and put you in a fancy hotel, you don’t say no. 🙂

I previously talked about my very awesome GDC trip here, so you can go read that for more.

So, holy cow again! Two months in to 2010, and I’m already 1 car and 1 trip ahead of last year on the awesome scale. If I was to think in terms of gameshow prizes, aside from crazy cash, what haven’t I won yet?

How about a free computer?

The final giveaway from Intel was for the first 100 approved apps. I made the Early Bird deadline, so I caught this one easily. Free “top of the line” Netbook! 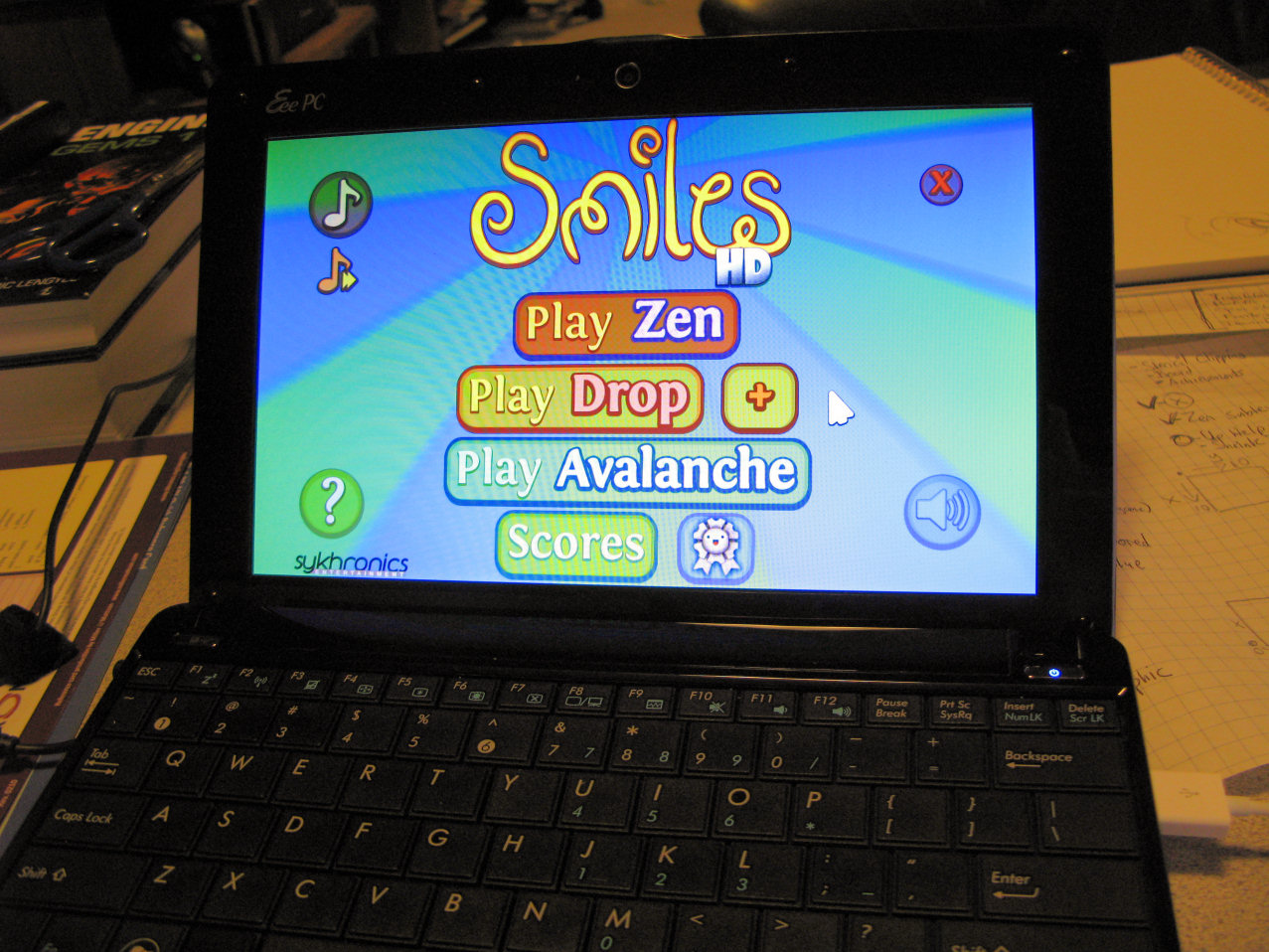 Smiles on my new Netbook

This worked out really great for me. My old laptop was an original Aspire One Netbook running Windows XP, but I’ve used it enough that the batteries barely give me an hour and a half on a full charge. My latest prize was a brand new Eee PC running Windows 7 Starter, this time with a claimed 10.5 hours of battery life. In practice I get a bit over 7 hours, but wow, that’s a huge step up from the 2-3 hours I used to get from my Aspire One. Excellent!

So, holy crap! That’s a lot of awesome! Clearly I am the happiest game maker in Canada right now with my car, computer, and everything PR wise that goes with winning an awesome contest like this. 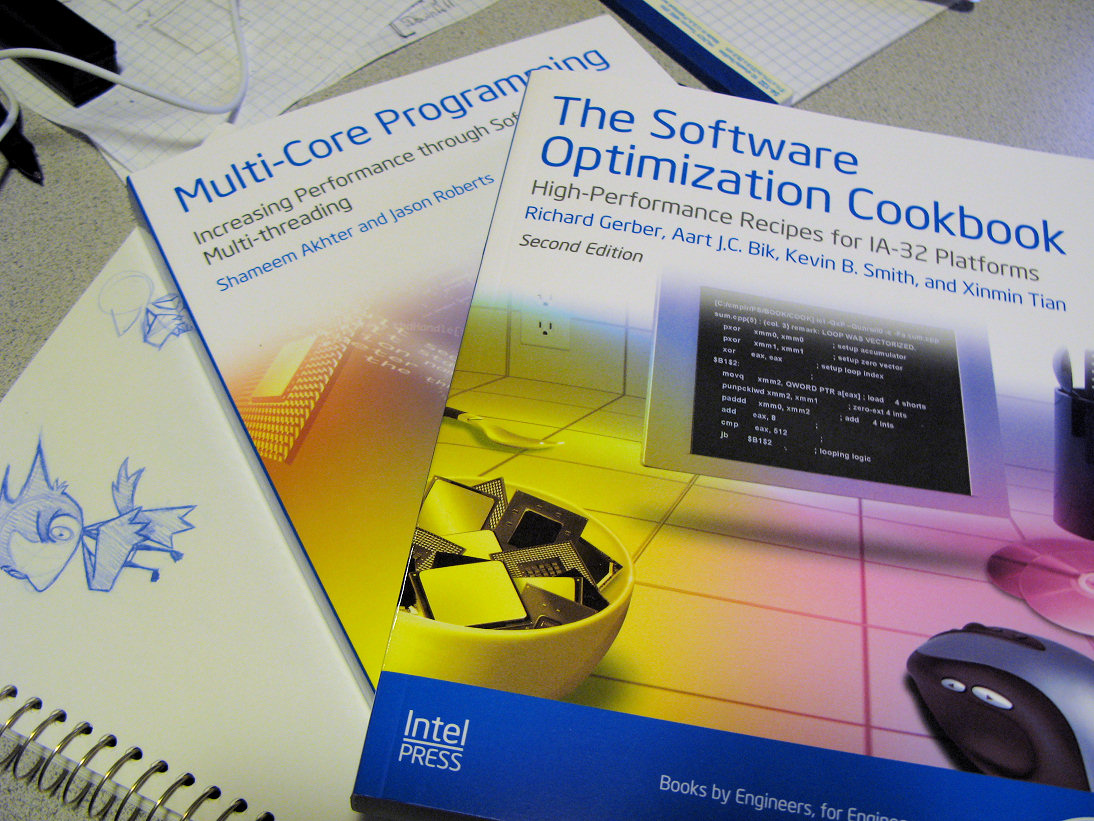 Submit an app and actually use their site, score a free book. Not bad.

As part of Intel’s dev program, submitting an app and participating in the community scores you points, which earn you belts. When you reach certain belt rankings, you get stuff. As you can see above, I got 2 books from Intel. The first for becoming a brown belt, and the 2nd for becoming a red belt. Also as part of the red belt, I’m getting a free year extension on my dev program membership. Nice.

Oh, and at GDC, I grabbed one of these from the Intel booth too. One of the cooler pieces of GDC shwag, now a permanent desk ornament.

Shake it and it changes colors, while the confetti swirls around the gel.

So really, it’s almost overwhelming how well things have gone. Without a doubt, I can definitely recommend other developers check out what Intel is up to with the AppUp Center. They’re running new contests now with even bigger prizes, you don’t want to miss it.

Heh, so really, how do you say “thanks” for being treated so well?

Well so far, I passed a note on to our people in the Ludum Dare community. I got pretty big response there, having several e-mail and IRC conversations with people. We’re a pretty large community of game makers, and like the sales pitch says, we made over 400 games last year! Wow!

Then at GDC, I scheduled 3 video interviews; Two with Intel, and one with NetbookNews.

The most “INTENSE” of the interviews was a live broadcast from GDC. Intel set up a small TV studio inside their GDC both with all the fixings; Multiple cameras (3), BIG HUGE lights (2), and a crew of 2 guys monitoring the video and audio. On the stage there was me, the host (Arti), and a guest host (Bob).

The interview was for Intel’s gaming and graphics show Visualize This. That’s online and archived now, so check it out.

Next was a short interview for Intel’s Software site. Not as in depth, but a slightly different discussion.

And there’s one more video interview with Netbook News, buuut I can’t seem to find it online yet. I did notice the host (Nicole Scott) just now started following me on Twitter, so I can imagine that video will be up soon.

However, Smiles did make appearance on Netbook News, in their CES report:

That was a VERY new thing for me, doing video interviews. Well really, I’ve done maybe 2 e-mail interviews and a podcast interview prior to that, so yeeeep, it was a very new experience for me. 😀

It’s fun, and quite shocking to be in a position that people actually want to interview you. It’s also reassuring and encouraging that maybe you really are doing something good.

And now for something a little more up my alley; Crazy technical mumbo-jumbo!

Over the past week and a bit, Bob from Intel and I fired a couple e-mails back and forth which became this:

An interview, but at the same time, a very technical rant on the stuff I do to keep my game code and assets portable. I’ve talked about this stuff here on my blog and in my book chapter, but we cover a lot of ground in a short article. I think it’s some good context for those looking for some insight in to porting to AppUp, but it’s just an article, you still have to do all the work! 🙂

And that’s all I’ve got.