Alright, so the clock says it’s Friday now. According to my whiteboard, that’s 29 days before I leave for the Game Developers Conference. Between now and then, I have a few commitments to take care of. Possibly a 2nd draft for my writing engagement, jury (selection?) duty, in addition to IGF preparations. It’s also an important turning point for Smiles as a product and a brand.  Lets talk about that.

Smiles has been a reasonable success.

Financially it’s no iShoot, but it’s done decently. If I hadn’t already left my cozy mainstream game industry job, I’d be seriously considering it. Long term scribblings and business plans would have filled my notebooks

Game industry notoriety wise, it’s an IGF Mobile finalist (for best game no less). An IGF nod is exactly what I aimed for as I stepped out of the usual 9-6 game industry day job.

And the game has been praised by every site that has reviewed it.

It’s everything you shoot for as a independent developer.

The problem is the exposure and sustainability.

Smiles thus far has lived entirely outside every top 100 list in the App Store. If you check mobclix, you’ll note that the highest it’s been able to achieve is #146 on the free arcade games chart (Free Smiles). As a result, it survives entirely on word of mouth.

I’ve since put some banner advertisements on a few of the larger iPhone sites, but real traffic seems to come only from distinct news posts about your game. Living outside the charts, every post is a lifeline. I can hope for that day Apple decides to feature me, but I shouldn’t hold my breath.

At the moment, and with GDC on the horizon, I have a good block of pre and post conference publicity available to me. That’s maybe a good 2 months of spotlight. But after that, it’s back to being lost in the vast Sea of iPhone apps.

One option is to continue supporting the game, new updates, features, and so on.  The problem is that Smiles as a product already contains arguably well over $5 worth of content and extras, and asking for more as an unknown would be murder. Asking for $5 is already far too much in the eyes of the majority. I had to split the game in half (Smiles Zen, Smiles Drop) to show the value of the product. There’s always room for minor updates, but you should always be moving forward.

The other option, start game #2. Good in the long term, as multiple products tend to help sell each other. But in the short term, sales would die down to a crawl if I didn’t keep the exposure up. That wont kill me, but why let that happen?

Alright, so the 3rd option (or rather, what are you doing)?

The first, I need to improve the brand and marketing. Not exactly spam the internet with more banners, but improve what and how I speak to the customer. My iTunes/App Store/all of descriptions are extremely vague. I approached the game marketing originally by pushing the game as mere cheerful and friendly product. Easy to play, and some actual depth to it. But that’s the same angle every other matching/casual game takes.

Smiles is an IGF Mobile finalist. That means there’s something special about the game. Until you sit down and really play it, you’re completely unaware that the game is actually different. That’s one mistake I’ve made.

Many of us gamers have fond memories of puzzle games. Tetris, Dr.Mario, Puzzle Bobble, etc. But not everyone has that same experience with Bejeweled. For many, that’s where our gaming tastes divided. Heck, I don’t care for it myself either. It’s slow. That’s what I changed in Smiles. I can’t be the first one first to have done it, but in my research reviewing games for Game Tunnel I never found one that at least did this. If I am, shame on you casual games industry.

Conventional “gamerized” casual games often hurt the truly casual appeal with timers and clocks. That’s stress. Many casual gamers play to relax and unwind. How can you do that when stressed? So I threw away the clocks and found ways to challenge you at a pace you control.

Also touch screens are intuitive. The control scheme of single touch actions on iPhone really makes it shine. Most people (especially new gamers) can move a finger faster and more accurately than they can with a mouse.

It all ties together in to a great little product, tuned specifically for the iPhone. The user base speaks highly of the game, which is great. But it’s a user base that grows only as new media outlets cover it at a reasonably frequency.

So this is goal number one. I need to improve the image of the game, be clearer what you’re getting as a consumer, give a stronger identity for media to grasp on to. It’s something special truly living in the obscurity in the App Store.  This is in preparation for the second part.

The second part, a cross platform strategy. In other words, make it available everywhere that’s practical.

To start, that mean PC, Mac and Linux. Actually, that’s already well underway. Smiles was actually developed on Windows and Linux, in addition to the Mac. 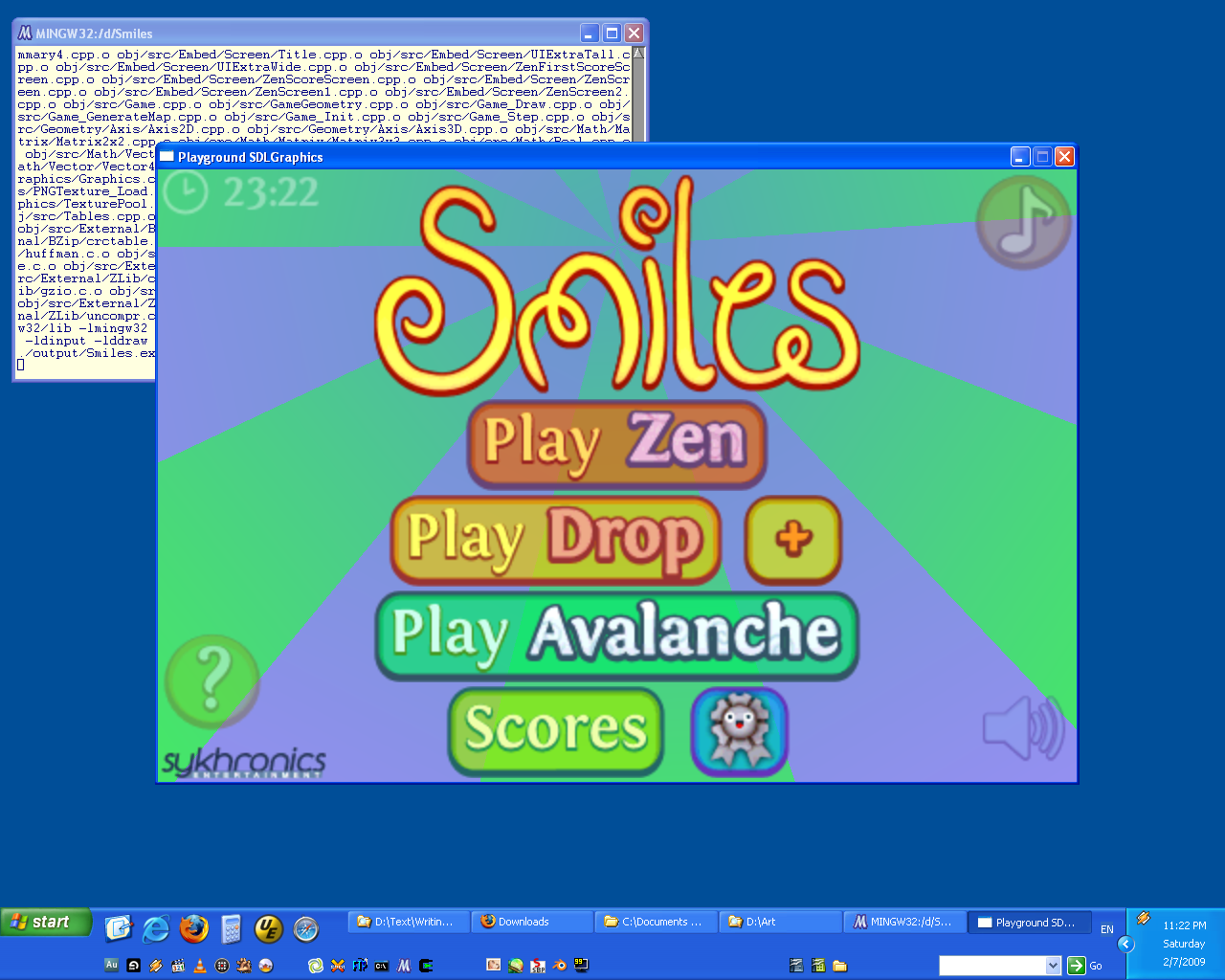 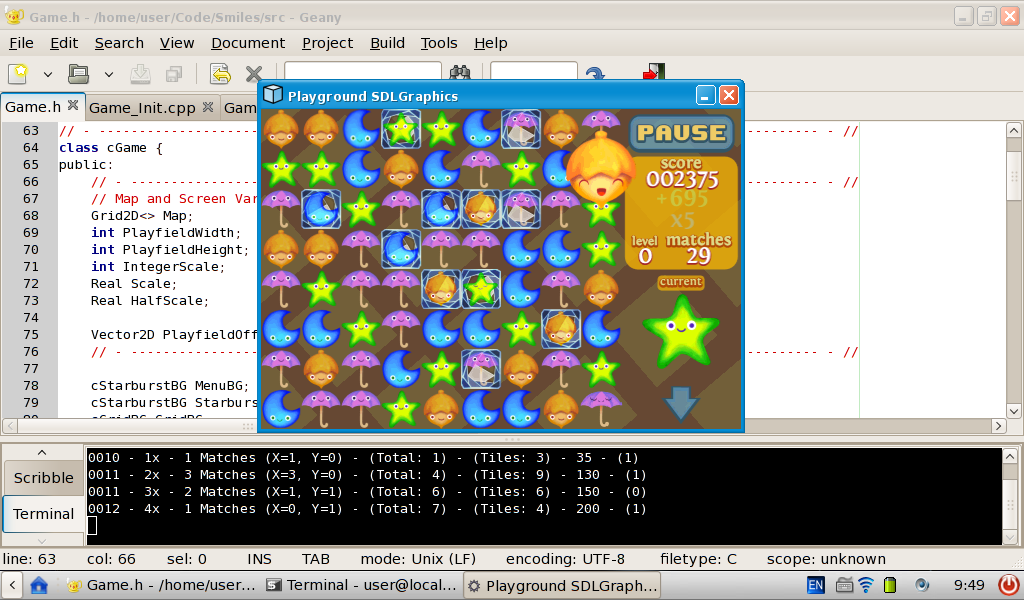 I come from a console game development background, so this has become standard stuff for me.

I spent a day this week troubleshooting graphics issues on an Intel GMA 945 graphics chipset. That works now, so the game will run on any reasonably recent PC. It’s hardware accelerated, relying heavily on fill rate. There are a hand full of changes that need to be made to suit the PC platforms, but it’s extremely playable as is.

So PC, Mac, and Linux are the immediate future of the Smiles game and brand. The goal being to expand the potential market before moving on to the next thing. Most the work is done already, it’s just a good couple weeks and some infrastructure away (not that I have that much time between now and GDC).

In addition, I’d like to pursue a console version. The original game assets are HD 1080p ready, though currently sized for the iPhone. The control scheme, while less efficient, could certainly be adapted to a D-Pad/Analogue Stick. And yeah, I realize a mere port to console is often not enough.

The console part may sound a bit “pie in the sky”, but I’m actually quite familiar with the pitch process… nearly an expert at turned down projects. 😉 Being a “home office” developer may work against me (7+1 prior Nintendo and a PlayStation game aside), but hey, I’m serious about this.

I’ll be at GDC in March, where anything can happen. I’m a game industry veteran with 12 very real products in my portfolio, a low burn rate, and I know how to outsource if needed. I don’t need a job or an agent, just an avenue. Come find me at the IGF Mobile pavilion, I’d love to chat. 🙂

And there it is. Certainly a lot more blunt than I’ve been, but it’s “no more Mr. Nice Mike” time.  😀