Just a few hours ago I could barely move. Nearly crawling my way out of bed to attack the day (ahem… night), after the long flight home.

I’ve since returned to my regular routine of pacing around my studio (i.e. basement), between moments of awe e-mailing and ranting everywhere it seems appropriate (forums, twitter). As I exhausted all those wonderful forms of communication, it seemed to be right time to start the required retrospective post.

To say I had a great time would be an understatement. Had I been around for just the usual routine of random game industry talks, I could see myself having just a “good” time. But being part of the IGF Mobile, attending the Independent Games Summit, IGF+GD Choice Awards, and the numerous other events and gatherings I was invited to put it over the top. Putting a face to the name/avatar of dozens of people I know from the Internets, hanging out with fellow developers, and catching up with friends and former coworkers was a blast.

I’m thrilled to be a part of this great community.

At the IGF+GD Choice Awards, Petri Purho of Kloonigames and Crayon Physics fame had this to say.

I’d say though, not winning the IGF can be pretty great too. 😉

iPhone is a tough market. There’s pretty much no disputing that. I’m not planning to fully disclose my sales numbers, but I figured I’d share some details to celebrate the occasion.

The day before my IGF nomination (late January), I hit my all time low of 1 sale. I’ve never sold zero copies, but obviously I was close. This was before my “lite” version. All I had pushing the game was the original $4.99 version, in addition to a pair of $2.99 versions of standalone Zen and Drop.

So the IGF nomination hits, blam, sales are back from the dead. Nothing big enough to put me on the charts, but it got people talking again.

A few days later, “lite” version Free Smiles hits the store. It didn’t have too much immediate impact, but I’d attribute most of my sales thereafter to the lite version.

Then comes the Game Developers Conference. After a great day of IGS festivities, hanging out with Nelson and a couple ToJam guys, back at the hotel Phil and I make a wonderful discovery. 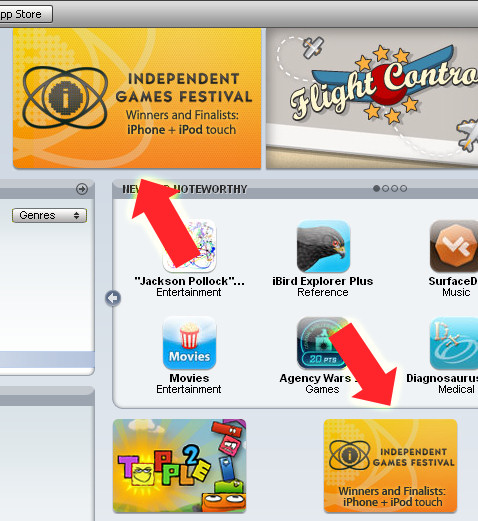 Where does that lovely image go you ask? 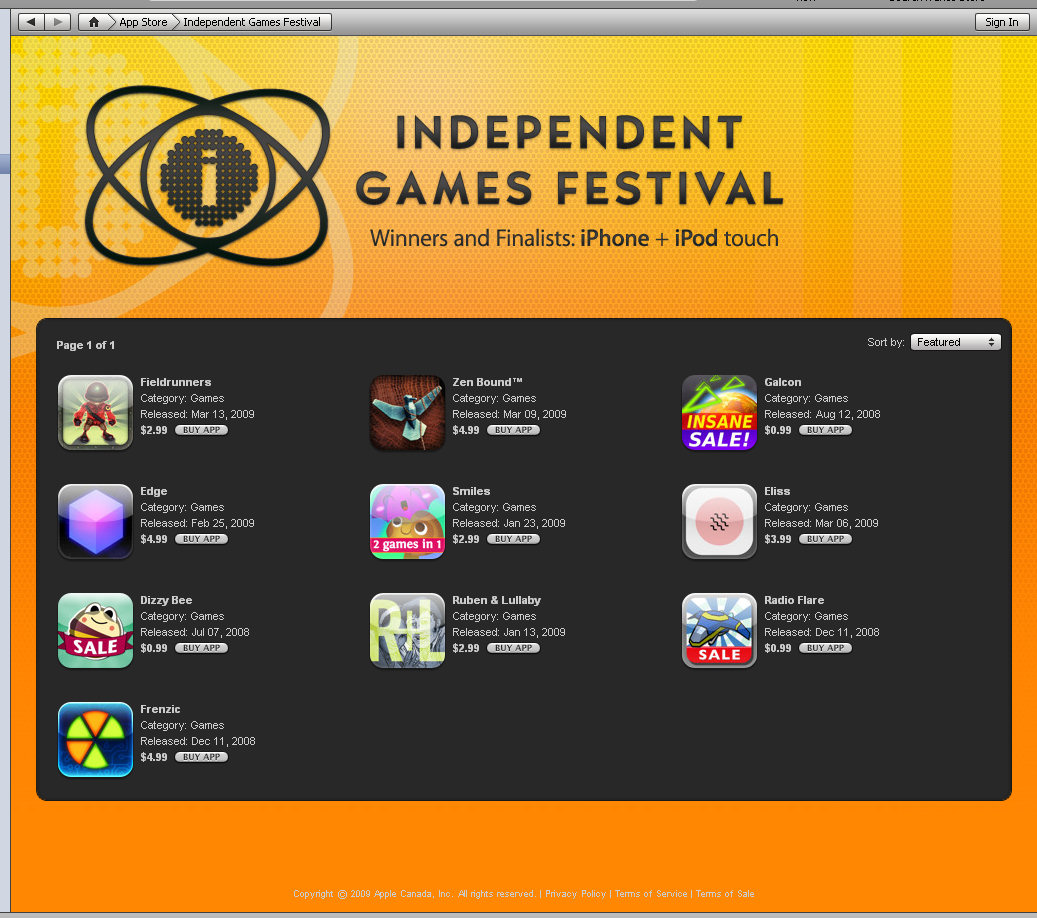 Heck yeah! So officially, Smiles has now been featured by Apple. Not individually yet, but as part of a collection of titles of some significance. Woo hoo!

Day 1 of that was by far the most sales I’ve ever made in a single day. Those numbers slowed quickly, but were still very good. Over the next few days, I finally broke on to Strategy and Family charts for the first time. I’m not sure if being on these charts has helped the momentum, but I quite enjoy seeing myself listed. As of right now, Smiles is #42 Strategy and #29 Family in the US. In my home country of Canada, well, I could use more love there. 😉

If you looked at the image above, you might have noticed a sale price. Yep, to end the night Friday, I put Smiles on sale. $2.99 for the full game, or $1.99 each. That resulted in a boost in sales, roughly following a similar curve to Apple’s initial IGF page results. Day 1 of the sale broke my prior “sales in a single day” record (though I earned less from it).

That’s my brief look at GDC and being featured for the first time. I’m going to leave the $2.99 sale up for at least today (Monday), and update the icon (even though you’ll only see it in iTunes and not the App Store).

Thanks to everyone that made my visit to GDC incredibly memorable, the judges for choosing my game out of the 100+ entries, and the IGF and GDC organizers that gave me this great opportunity to show more people my game.